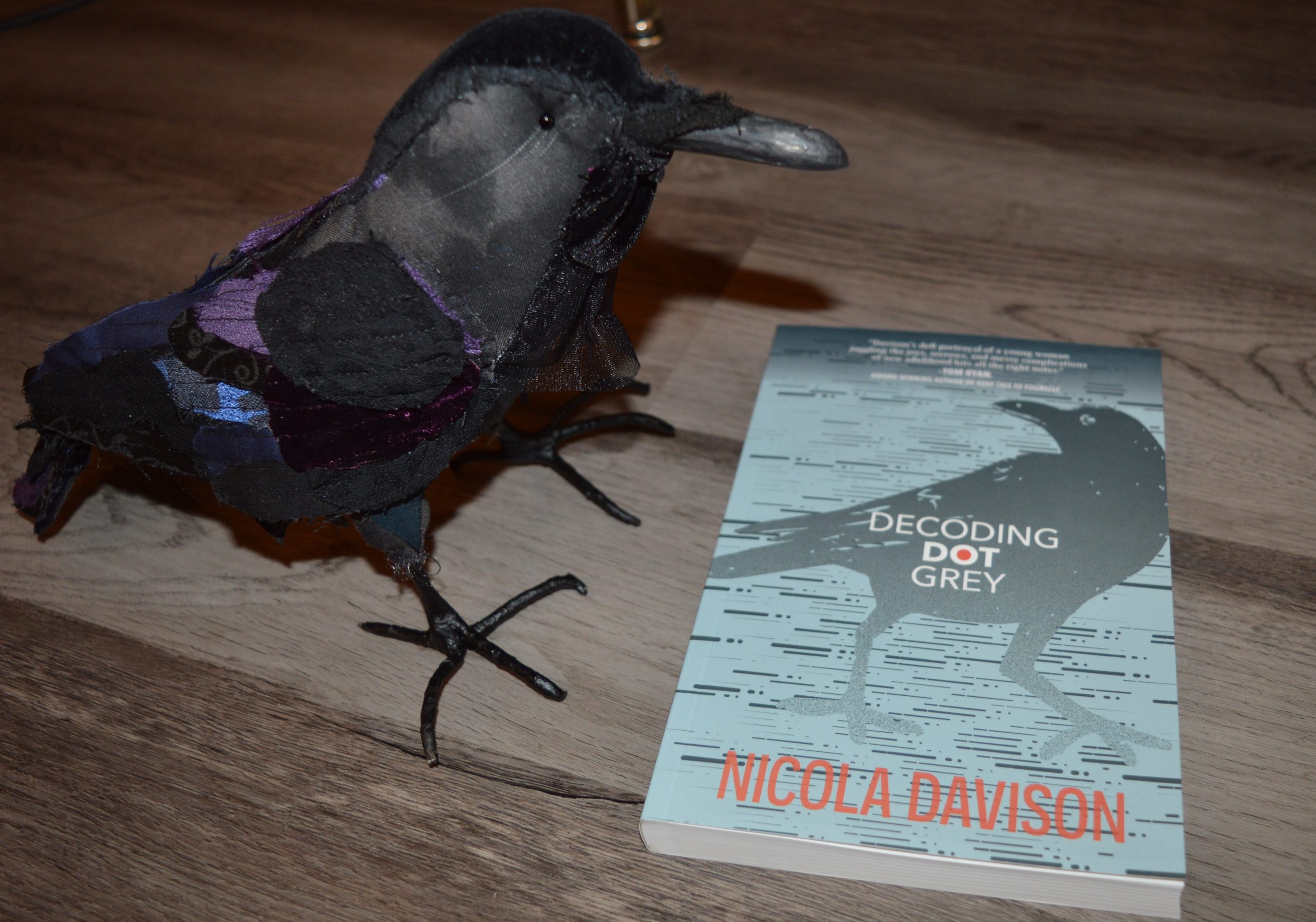 Dartmouth Author and photographer, Nicola Davison’s new release Decoding Dot Grey, published by Nimbus Publishing, is our first Young Adult/New Adult Staff Reads selection. As with past Staff Reads, we encourage and welcome customers, volunteers, book club members, and followers in joining us in reading and reviewing our Staff Reads and we are pleased with the numbers that participate. This time, to make things a little more interesting, we have asked those who have participated to include a picture and a couple of sentences about a current or past pet they owned that had a unique personality.

For those who are not familiar with the story, here is the book blurb:

Eighteen-year-old Dot Grey doesn’t hate people; she’s just not especially fond of their company. It’s 1997, and she’s just left home in favour of a dank, cold basement, where she lives with several small animals, including a chorus of crickets, a family of sowbugs (they came with the apartment), a hairless rat, and an injured crow.
Her job at the animal shelter is her refuge—so long as she can avoid her father’s phone calls. He’s trying to get Dot to visit her mother, but Dot knows there’s no point. No one ever understood her like her mum, who helped Dot channel her vibrating fingers into Morse code, their own private language. But her bright, artistic mother was terribly injured a year ago and Dot can’t reach her, even with her tapping fingers. Left with only a father who refuses to face the truth, she focuses on saving the little lives at the shelter.
When Joe starts working there, everyone thinks he has a crush on Dot. Dot thinks he’s just awkward and kind. He shows his good heart when they rescue an entire litter of puppies together, and Dot finds herself warming up to him. But Joe waits too long to tell her his deepest secret, and soon she is forced to deal with two losses. In the end, Dot’s weird way of looking at the world is the one thing that will, against the odds, help her connect with it.
With clever wordplay and the most motley of crews—human and otherwise—Decoding Dot Grey is a tender and delightful novel from the award-winning author of In the Wake.

Review: Decoding Dot Grey by Nicola Davison is a charming story set in Halifax/Dartmouth in 1997. Dot is an 18-year-old girl who works at an animal shelter teeming with unique and diverse personalities, from the animals to the staff and volunteers.

At the beginning of the story, Dot rescues a crow that was hit by a car, damaging its wing. We then learn that her Mother was also hit by a car the year before and has not regained consciousness. This story is all about; relationships, the diversity in dealing with grief, healing both mentally and physically, and forgiveness. I plan to present this book to our book club as a recommended read.

Sue once had a rescue cat named Minuette. They called her Mini for short, partly because it was a short form of her name and partly because she was part munchkin, a small cat with short legs. Mini had a bobbed tail which was believed to be chopped off by kids when she was young. Mini had a very unique personality, she didn’t like men (except for Sue’s Dad), she could run faster and beat a squirrel up a tree, she liked to run and slide on newspapers, and she would also go crazy over plain donuts.

Review: Dot Grey has had more than her fair share of grief in her eighteen years. Every facet of her life seems to include a dreary atmosphere, but it is amidst all this darkness that we see the light and love in her life. The frailty of it all. From the animals that make our hearts swell with overwhelming love and happiness, to the joy that comes from the connection of others and how important those people are in our lives. I read this book while going through some dreary times of my own. I had to step away from it and found myself coming back. If not for Dot, then for the furry and feathered company she keeps. It’s a book I’ll read again and again as a reminder of the goodness that lies within what seems to be our darkest moments.
In the immortal words of Leonard Cohen ;
Ring the bells that still can ring
Forget your perfect offering
There is a crack, a crack in everything
That’s how the light gets in…

Meet Farrah. She’s a rescue. She’s either living the good life or secretly judging us! I fell in love with her at first sight. She’s super-intelligent, but when her herding instincts kick in lookout. She loves her family and her fur siblings. She’s been battling epilepsy for the last little bit, so we’re enjoying every seizure-free moment we can with her. Her personality makes us laugh every day.

Review: Decoding Dot Grey by Nicola Davison was our 11th staff reads selection- I enjoyed reading this novel about a young woman trying to come to terms with a tragic accident that leaves her mother in a coma. She finds solace in helping to care for the animals at a local Rescue where she has been volunteering for several years. When Joe comes on as a new recruit Dot feels a connection to him. But Joe has a secret. A secret that will cause Dot to come to terms with her feelings over the accident and the power of forgiveness. With an assortment of characters both human and animal Dot Grey hits all the emotional highs and lows. 4.5 star rounded up to 5 stars. Amy McIsaac Goodreads May 2022

This is Millicent. Just Millie most of the time unless she was in trouble then she was Mill-i-cent!! She was a rescue from our local SPCA. She brought us a lot of love and happiness. But like all living things one day we had to part ways. She didn’t have any special tricks but she did love to go for walks and car rides. She liked to fetch ball but would not give it back. She loved to play in snow and looked like a snowball when she finally came in.

Review: This was such a touching story with themes of forgiveness, acceptance, and kindness in a world filled with cruelty. The characters grow into themselves as the story progresses, accepting not only their own faults but those of others. If you’re anything like me, you’ll find yourself rooting for them all in the most unlikely of ways. Perfect for your next feel-good read! Erin O’Neill Goodreads June 2022

Willow was a saucy yet incredibly loyal English Springer Spaniel. Forever in love with her people, she smiled every time someone came home, although it looked a bit like a snarl. She often refused to eat unless her favourite person came home, and would forgo the bed in favour of the cold floor by the back door until they returned. We couldn’t have asked for a better family pet.

I was grateful the wee Scotsman was tucked up beside me when I read the three words on page 205 that completely shook me with the story twist. Niki Davison’s soon-to-be-published DECODING DOT GREY (March 2022) left me hugging the wee Scotsman a little tighter as the tension mounted.

Spending time with Dot Grey as she navigates the inhumanity of the suffering that brings the animals to the shelter where she works was hard for this animal lover to read. Knowing there are people like Dot, her boss and her co-workers helped ease the pain this reader experienced while reading.

The author is so tender with her character, Dot Grey, you feel lifted and gently placed into the story, even though you want to run away from the things happen around the to Dot. You find refuge from the despair of Dot’s personal life at the animal shelter where she works – just as Dot herself does. The resilience of people and animals is always surprising and I often wonder while this is so. Humans and animals have such strong capacities for love and forgiveness. Thanks again to FINDING DOT GREY and Niki Davison I can believe that old cliche holds true – love conquers all.

Despair, tragedy, loss and inhumanity are all present in the story. But Niki Davison also writes about hope and forgiveness and the underlying presence of humanity, despite all the inhumanity and negative undertones present in Dot’s life.

“I want to name this emotion, as it’s new. Not despair or anger or gutting loneliness. It is something close to joy, adjacent to it. Joy’s frail landlord who needs a walker sometimes.”

Niki Davison like your precious Jersey Mae, the wee Scotsman is the most underpaid therapist ever.

Thank you for turning your personal experience working in an animal shelter this stunning work of fiction.

Thunder the Westie (aka The Wee Scotsman) was the brightest light in any of my days. He hated magpies, went beserk when the UPS was on the street, had a collection of snuggly blankets, loved being read aloud to and was fiercely protective of his humans. In the neighbourhood he was affectionately known as the big dog in the little dog’s body. The funniest thing ever was the look on waiting room faces when he was called for his turn at the vet. It was hilarious to see the smiles and hear the polite laughs when they saw this little dog responding to the name Thunder. He was there for my reading of Decoding Dot Grey. I am sure he felt it was worthy of his “four paw” rating!