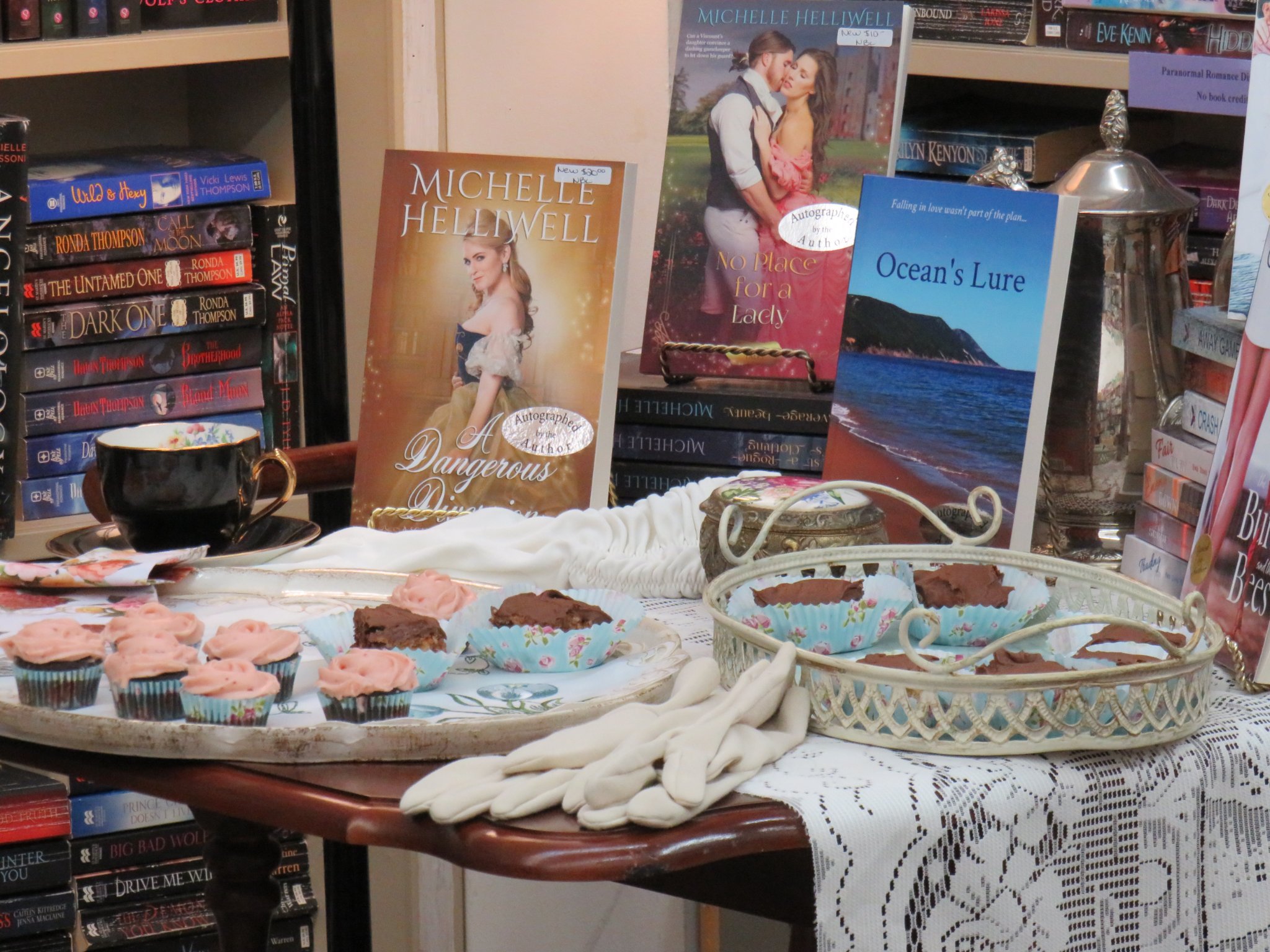 In celebration of the 4th annual Bookstore Romance Day, we hosted a Romance Fiction Literary Salon Sunday, August 21st, with special guest romance authors; Michelle Helliwell, Cathryn Fox, and Tim Covell. The aim of the salon was to celebrate Romance fiction- its books, readers, and writers, which I must say, we succeeded in spades!

What is a Literary Salon? It’s a gathering of like-minded individuals that meet to discuss a particular literary theme, in our case Romance Fiction, and is hosted and organized by a Salonnière. We invited romance writers to talk about their writing process and to present, and discuss their books and future projects. We served refreshments, sweet treats, and tried to create a romantic atmosphere that would inspire creative thought. We aimed for the 1940s classic feel. We asked that people wear their Sunday best and encouraged the wearing of hats. -See 7 steps to hosting a successful Literary Salon at fairygodboss.com.

The structure of our Romance Fiction Literary Salon was as follows:

Historical Romance author Michelle Helliwell, in her tiara, was the first to lead the afternoon discussion. We learned that she is attracted to the historical romance genre by all the historical trappings, especially men in puffy shirts. She discussed her Enchanted Tales Series that are chock full of dashing (if somewhat crusty) heroes, take no shit heroines, and unapologetically fairytale-like vibes. Then she discussed her Scandalous Spinster series. Who are the Scandalous Spinsters? Imagine a girl squad Robin Hood vibe wrapped up in foggy Victorian Halifax. Every heroine, a talented thief, every hero a potential mark. It’s smart, scandalous fun! She read a selection out of her novel A Dangerous Diversion and we learned that her next novel, A Captivating Caper, book 2 in her Scandalous Spinsters series comes out on October 3rd and she revealed the cover at our salon!

Tim Covell was next. We discovered he prefers to write at his desk and that he has a collection of typewriters, just in case his computer ever breaks down. He read a selection of his gentle contemporary romance novel Ocean’s Lure, which is set at a Cape Breton campground. He then surprised everyone in attendance with a reading from his upcoming novel. Set to be released in the spring of 2023, it’s about a male underwear model, and a photographer, that by the sounds of it, we will all be standing in line to buy!

The final presenter of the day was Cathryn Fox who discussed her new Scotia Storms hockey series set in Halifax, Nova Scotia, which will be published in sets, the first set is called Rebels. She also spoke about a book she wrote called Crazy Apologetic Canadians, a play on Crazy Rich Asians, which she attempted to Americanize for a publisher, and after chapter two gave up, so she plans to self-published it instead. The attendees of the salon were treated to a sneak peek of the cover. She then read a selection out of her upcoming release Crash Course which is book 3 in the Scotia Storms Rebels series.

Each of the presenters had the attendees listening with rapt attention. The final attraction of the day was the sweets. 5 sweets were selected out of Mary Janet MacDonald’s cookbook Tunes and Wooden Spoons– Recipes from a Cape Breton Kitchen. These included: Blueberry Orange Loaf pg. 19, Lemon Loaf pg. 22, Chocolate Chip Jumbles pg. 24, Black and White Squares pg. 50, and Decadent Chocolate Cake pg. 56 made into mini cupcakes iced with Strawberry Buttercream Icing.

I would like to thank Jen Robley who baked 3 of the sweets offered during the salon, she also loaned us the use of her juice dispensers, serving trays, tablecloths, throws, and even her tea wagon. I would also like to thank Michelle Helliwell, whose newsletter first gave me the idea of hosting a salon, and after my enquires, sent me links to various articles about salons for my research. And lastly, I’d like to thank Warren Hoeg and Liz Hayward who took time out of their busy schedule to drop by and take pictures of our event, many of which were used in this blog. -Sue Slade Salonnière