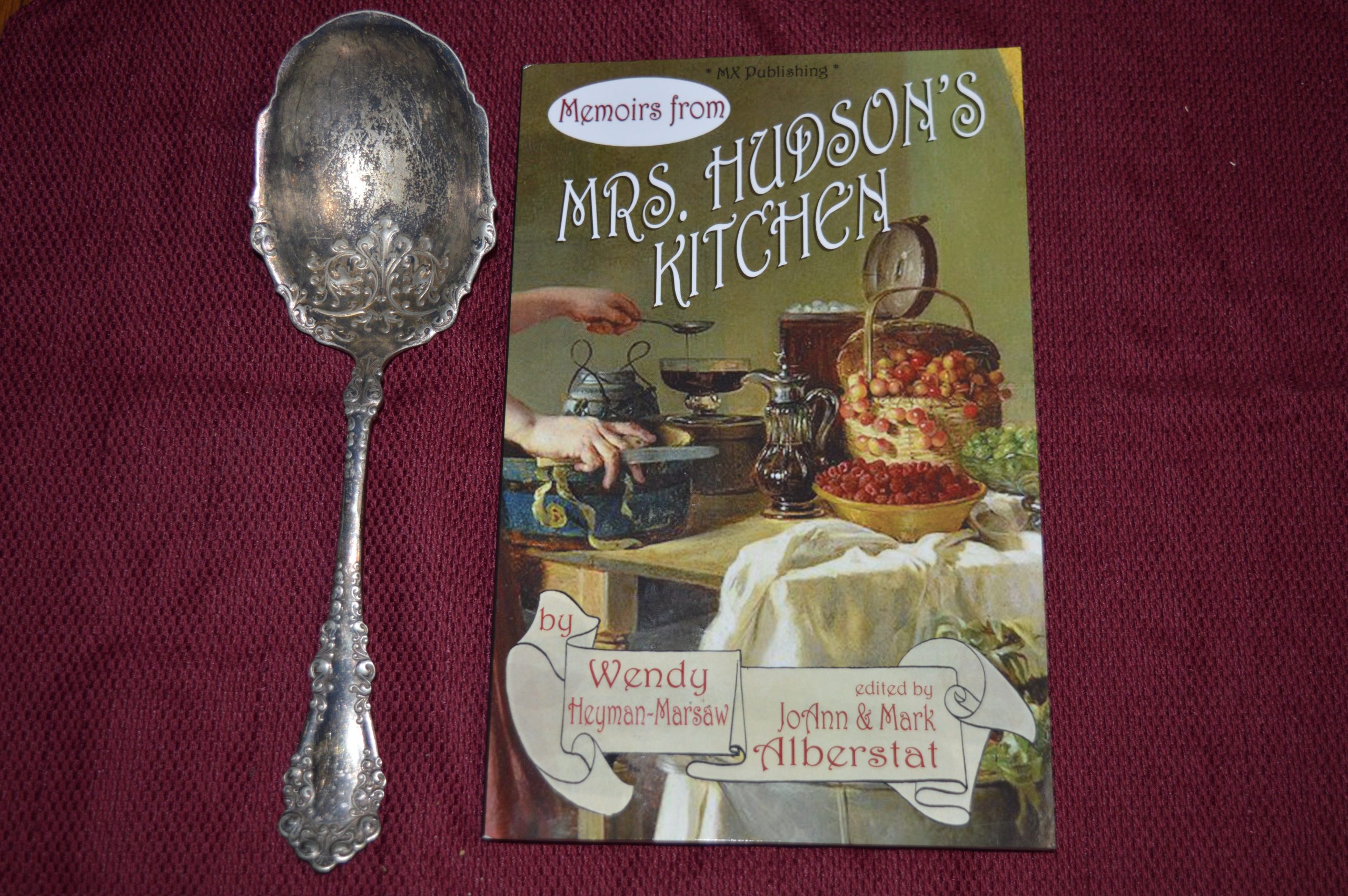 From Mrs. Hudson’s unique perspective comes a book about her famous lodgers and their involvement with various aspects of Victorian life.  Over 50 recipes are included that reflect dishes Sherlock Holmes and Dr. Watson would have enjoyed.

Mrs. Hudson is possibly the most famous landlady in literature. Residing over 221B Baker Street, she saw many clients, villains and Baker Street Irregulars during the tenancy of Sherlock Holmes and Dr. John Watson. This series of columns, thoughts, recipes and memoirs are from a long-running column in the Sherlockian journal Canadian Holmes. Columnist, Wendy Heyman-Marsaw puts herself in Mrs. Hudson’s shoes, up and down the 17 steps, and recounts not only the time and era but the food, dining and eating habits of Victorian England. With many illustrations from the Strand Magazine, readers will get a rare peek inside Victorian life. https://www.mrshudsonskitchen.com/

Review: “Memoirs from Mrs. Hudson’s Kitchen” is a slim volume, stuffed with content. ‘Twas years ago I read The Complete Works of Sherlock Holmes, and now I wish to reread the stories, this time allowing Mrs. Hudson more attention, recognizing her as the important character she was. Wendy Heyman-Marsaw has done the work for me, of course, and in her own book, writing as Mrs. Hudson, she offers the reader a picturesque description of the Victorian era, including its clothing, medicine, wars, inventions, and the societal position of women and children. It is intriguing to imagine the landlady of Holmes and Watson delighting in the ice chest and ‘telephone apparatus.’ The book includes copies of old print ads for tea and coffee, whiskey and health, pottery and cutlery, and Hovis bread and biscuits. There are illustrations from Sherlock Holmes books and old cookery books, and even notes from Florence Nightingale on meals for invalids. There are brief histories of London restaurants and hotels, railroads, men’s fashions, Turkish baths, bee keeping, curry as an English national dish, and country inns, some of which have been in existence since the days of the Crusades. This is all in addition to the Victorian recipes from Mrs. Hudson’s kitchen.

With an English mother, I found so many of the recipes familiar: toad-in-the-hole, junket, bubble and squeak, treacle tart made with golden syrup, mint sauce, crumpets, and Battenburg cake. They pulled me back to the tastes of my childhood. I plan to try my hand at Turkish Delight, and chocolate truffles, and certainly must invite my brother to a Devonshire tea, if only I can find some clotted cream. Some recipes I will read only, such as those for tobacco cookies and haggis in ox cecum. I am sure not to try cock’s combs on a skewer, and never was tempted by my mother’s suppers of drippings on bread.

What a complete treat this book is, so meticulously researched for Victoriana, for tales of Holmes and Watson and their beloved Mrs. Hudson, for the food of the time which Heyman-Marsaw has made accessible to the modern cook. It is a delight from cover to cover. Lyn Thomson Goodreads September 2021

Review: For a person who has visited the museum now located at 221B Baker Street in London and who has hosted traditional British Roast Beef feasts with all the trimmings including Yorkshire pudding and boiled puddings with hard sauce, the Memoirs from Mrs. Hudson’s Kitchen was a fun read. I enjoyed the reprinted advertisements scattered throughout the book and the recounts of the Victorian England Era, from the railways to the coffee houses. I had forgotten how much I love bread pudding and now will have to try the recipe in the book. Sue Slade Goodreads September 2021.