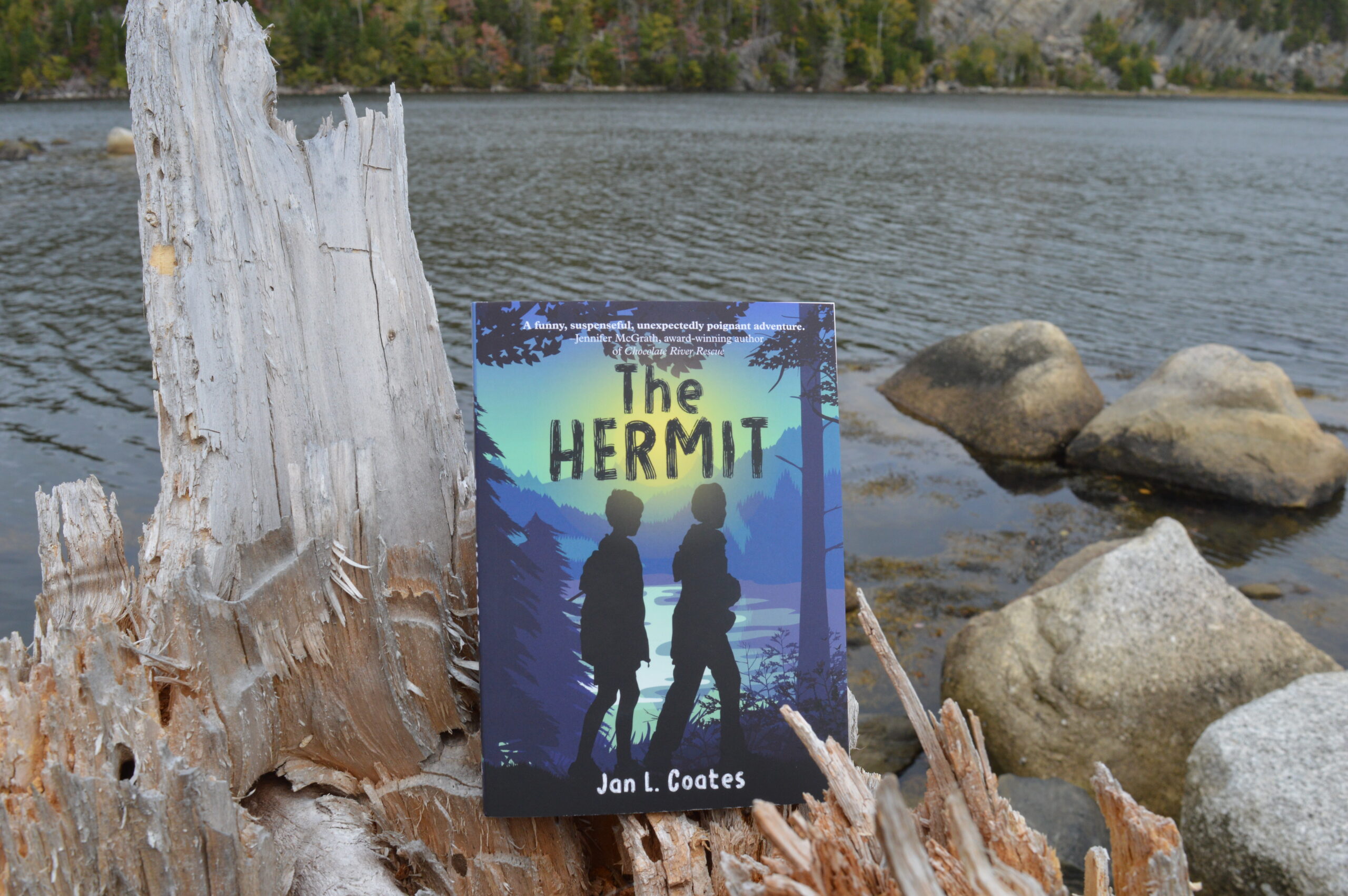 Local author Jan L. Coates is in our spotlight this week. Jan has written over twenty books for children. Her latest middle-grade novel ‘The Hermit’, is loosely based on the real-life ‘Hermit of Gully Lake’ and published by Nimbus Publishing. #IReadCanadian Every young Canadian should have access to Canadian books.

For a chance to win a signed copy of The Hermit- See our Facebook Page. The draw date is Sunday, January 24th.

Eleven year old Danny Marsters was planning to have a fun but straightforward summer: pool parties and bike rides with his buddies, the odd game of washer toss with Grampy, and, of course, soccer camp. He didn’t count on developers threatening to build condos on the land the whole community had worked so hard to turn into the best soccer field in the county. And he definitely didn’t expect to stumble across a dishevelled man living all alone, deep in the woods behind Barnaby’s Brook. But Danny’s curiosity gets the better of him, and he slowly befriends the hermit. Just when he discovers a hidden connection between himself and the old man, disaster strikes, and more secrets are exposed that just might help Danny save the soccer field once and for all. Loosely based on the real-life “Hermit of Gully Lake,” this story of unexpected friendship and close-knit neighbourhood bonds will appeal to anyone who has had to stand up for the things—and the people—they love. With themes of environmentalism and community activism, The Hermit is a timely novel full of heart.

Great News!!! Jan has mailed us a Hardcover copy of her picture book ‘Sky Pig’ for us to give-a-way!!! This a perfect give-a-way for Family Literacy Day which is January 27th & World Read Aloud Day February 3rd. If you recall last year Jan was here at our store to help us celebrate World Read Aloud Day. The draw will take place Sunday, January 24th. #WorldReadAloudDay#famliyliteracyday

First Jack and Ollie try the leafy branches. Then a giant kite. Idea after idea, invention after invention, boy and pig drag them all to the top of the highest hill. Then Ollie runs as hard as ever a pig could run, until his trotters lift from the ground and Crash! In Sky Pig, Jan Coates weaves a story of sweetness and whimsy, ingenuity and empathy. Plasticine artist Suzanne Del Rizzo brings dimension and energy to the tale of a pig who wants against all popular truisms to fly. He may never reach the sky on homemade clockwork wings, but Ollie still dreams as hard as ever a pig can dream. And Jack, a true friend, realizes that just because a pig can’t fly in the ways they have tried doesn’t mean he can never soar. An uplifting picture book for anyone who has tried and tried again.”

Jacob’s brother, Ben, is always king of the castle. Jacob is tired of being the dirty rascal! Jacob and his grandfather decide to set out on a camping trip to Nova Scotia’s Kejimkujik National Park. There, they find lots of hidden treasure fit for a king, like emeralds (the green of a hemlock’s foliage), amber (the eyes of a deer), and diamonds (in the sky). Jacob even builds himself a crown, and it isn’t long before Gramps declares Jacob the King of Keji!

A Halifax Time-Travelling Tune published by Nimbus Publishing is a slice of Halifax’s history.

Grandma closed the piano lid. “I love singing those old tunes with you.
I wish you could have seen the Halifax I once knew.”

This dreamy and whimsical story follows a young child who travels back in time to 1950s Halifax with a whimsical tune. Follow the pair through Point Pleasant Park, the Public Gardens, Spring Garden Road, Citadel Hill, and other historic Halifax landmarks, showing off all the sights and sounds of the city. With lively text from Governor General’s Literary Award finalist Jan Coates and vivid illustrations of mid-century Halifax by Marijke Simons, A Halifax Time-Travelling Tune is bound to conjure more than a few bedtime sing-a-longs.

KARISSA & FELIX is one of Jan’s self-published picture books, we have copies in-stock.

KARISSA & FELIX is, at its heart, a book about finding hope after loss, and the idea that the essence of who we are lives on in the hearts and memories of those we love. Karissa and Grandfather Felix love the beach, birds, and sea glass. When Grandfather begins to roam, can’t find his way home, they have to leave the beach. In the city, Karissa becomes friends with a crow she names Felix. Like Grandfather, he has only one leg. When Karissa finds out that forever is a very long time to miss somebody you love, Felix brings her a very special gift, the gift of hope. This is a story that will provide an opening for that difficult, yet necessary conversation about

Say What You Mean, Mean What You Say a middle-grade novel published by Trap Door Books an imprint of Nevermore Press. People living on the street, mental health struggles, AND a fairy dogmother – what’s not to like?

Jake MacKinnon’s fed up with people not saying what they really mean. When he rescues an old hound dog from the pound on his twelfth birthday, he has no idea of the impact she’s about to have on his life. Sandy turns out to be a fairy dogmother, and grants Jake’s greatest wish—to be able to read minds, in particular that of his wannabe singer songwriter father who’s abandoned him and his mom and “gone out west” to find himself. Jake soon discovers that mind reading isn’t always a good thing. Sometimes, the truth sucks.

Dancing With Daisy is published by Running The Goat Publishing

When he finds a photograph of his grandfather as a young man, Liam is full of questions. But that’s just fine, because Grampy has a story to spin with every answer.

On a fall day in 1962, he tells Liam, he had a run in with a nasty girl in search of a dance partner: Daisy was her name. What follows is a tall tale about Grampy’s tango with a hurricane, and all those signs of aging–the wrinkles, the stooped back, the croaky voice, the false teeth–can be chalked up to Daisy’s persistence and Grampy’s refusal to dance. Of course, it takes a talking to from Nana to get that Daisy to blow off elsewhere.

Acclaimed author Jan L. Coates and award-winning illustrator Jos�e Bisaillon join forces in this charming picture book to craft a tale both touching and amusing about aging and the bond between a grandfather and his grandson. Bisaillon’s gorgeous, playful illustrations bring the dance to life, evoking that windy girl and her insistent ways, as well as the warm affection between Grampy and Liam.

And lastly, Jan’s debut novel A Hare In The Elephant’s Trunk-  a story about hope and survival in southern Sudan. It was a finalist for the 2011 Governor General Award!

In the little village of Duk Padiet in southern Sudan, a boy named Jacob Deng thrives on the love of his mother, the companionship of his sisters, the excitement of learning how to look after his uncle’s herds of cattle. The year is 1987, and suddenly in the night soldiers from the north invade the village, looting, burning, and killing. The war has arrived, and the life of Jacob will never be the same. This novel is based on the real life experiences of a Sudanese boy who, with thousands of other boys from the region, fled for his life and spent seven years walking through deserts, grasslands and forests, crossing crocodile-infested rivers, surviving life in massive refugee camps. The so-called Lost Boys of Sudan – as they were called by an American aid organization – numbered as many as 27,000, and while many died – from starvation, attacks by wild animals, drowning, or through the brutality of the military – many survived. Jacob never returned to his village, but though he was only seven years old when he had to flee, he somehow managed to live through an almost unimaginable ordeal. Throughout the seven years covered in this story, Jacob resists the temptation to join the liberation army. Steadily Jacob finds himself more and more adhering to his mother’s advice that getting an education is crucial to escaping the cycle of violence that afflicts his country. Jacob’s struggle, then, is to persist in seeking out teachers and eventually a school where his ambition to learn about the world can be met. Through it all he learns about loyalty and love for close friends who have been thrust together with him on this extraordinary journey, and also about the guiding light provided by the memory of his mother.