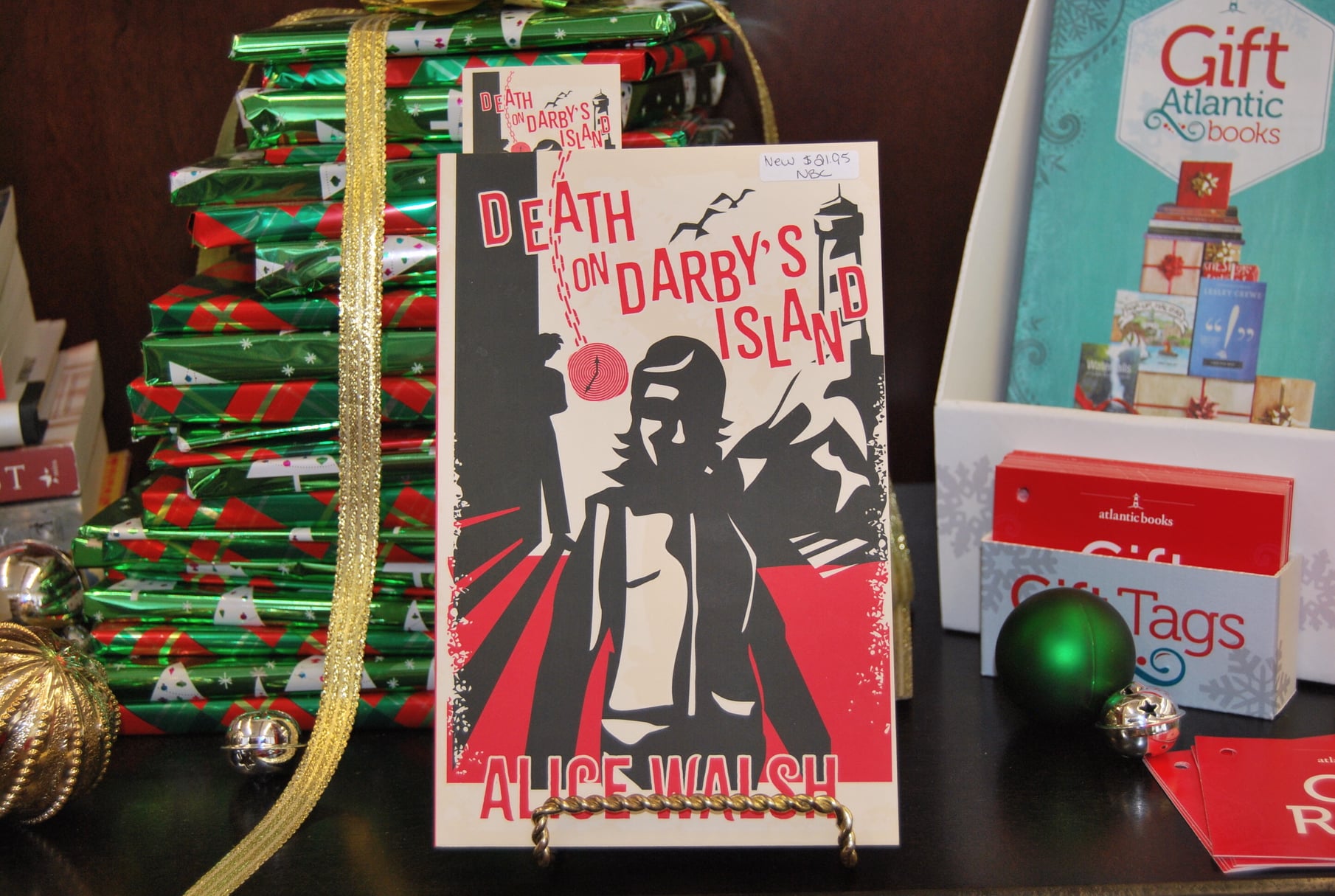 This week we are spotlighting Alice Walsh’s murder mystery Death on Darby’s Island, published by Vagrant Press. This story is set on a little Island off Newfoundland in 1975. For a chance to win a signed copy of this book, answer the following question on our pinned post on Facebook: Alice writes this story with a distinct Newfoundland dialect. Do you find when you’re reading stories with different dialects that you “hear in your mind the characters speaking in that dialect?” The draw will take place on Sunday, December 12th on our Facebook page.

Nothing exciting ever happens on Darby’s Island, Newfoundland. That is until one summer afternoon in 1975 when a Chevy towing a trailer drives off the ferry. The Great Prospero, Hypnotist and Magician is printed in large red letters across the side. People on the island are thrilled that the renowned Prospero is going to perform at the community hall. However, after the hypnotist suggests his subjects are seagulls, Jake Pickford, with arms flapping, leaves the building and does not return to the stage. That same evening, the archbishop is found stabbed to death on the beach. Hours later, Jake becomes the number-one suspect. The only problem: he can’t remember anything.

When RCMP officer Blanche Ste Croix is called back to her hometown, she’s girded herself for the inevitable confrontation with her mother-in-law. But when a storm prevents the forensics team from reaching Darby’s Island, Blanche finds herself instead leading her first murder investigation. Over the course of one rainy weekend, she questions family, friends, and the cast of oddballs camped on the beach. At the same time as she’s working to prove herself as a police officer, Blanche is forced to face the traumatic events of a decade earlier that took her away from the island in the first place.

As she conducts interviews and proceeds with the investigation, she uncovers secrets, coverups, and no shortage of suspects. Even the archbishop has his share of skeletons in his closet. But when the truth comes to light, it is more sinister than anyone could have imagined

In May 1974, the RCMP started accepting applications from women. In September they started their training, graduating in 1975. Early female officers did not have an easy time of it- facing prejudices not only from within the RCMP but from the public as well. In ‘Death on Darby’s Island‘, as the only available officer on the Island to lead the investigation into the murder of the Archbishop, Blanche faces these prejudices to prove herself an officer. #GiftAtlantic #ReadAtlantic

Review: Death on Darby’s Island by Alice Walsh is a murder mystery set on a little Island off Newfoundland in 1975. The story bounces from the investigation of the Archbishop’s murder on the beach to the memories of the investigator’s childhood on the island. The story has some unexpected plot twists that will keep you invested in the story until the very end. Goodreads Sue Slade, October 2021

Review: This book is a murder mystery set in 1975 on Darby’s Island, a ferry ride from mainland Newfoundland. It takes place during a weekend where a storm prevents the forensic team from getting to the island. Which leaves our main character, RCMP officer Blanche Ste Croix, as the main character and principal investigator. I love the twist and turns and, of course, the unfolding of whodunit.
There is a cast of interesting characters, along with the hypnotist and magician, The Great Prospero, and his assistant, Miranda. Blanche’s past adds depth as our main character investigates the murder.
Her childhood a reminder of how life is not always sweet. Hers a childhood filled with poverty and her father’s addiction and abuse. Of family secrets and shame.
Her story one of survival and bettering herself. Of moving beyond the past.I loved the mention of TV shows popular during that time. Styles of fashion. Bits of history. Our local Nova Scotia author Alice Walsh is a master at writing authentic Newfoundland dialect. Possibly since she was born and grew up there. Death on Darby Island balances serious situations, while also touching on humorous moments. Bringing a smile to this reader’s face. I think this book would make a great movie, too.

*If you enjoy murder mysteries and a touch of history and real-life situations, give Alice’s book a read! Barbara Carter Goodreads, October 2021

Review: Death on Darby Island is a murder mystery, set in Newfoundland. The book has a charming cast of rich and imperfect characters.
The citizens of Darby Island are proud people, life for some on the Island was not an easy one.
Plot twists and family secrets made this book an interesting and enjoyable read.
I will look forward to reading more of Alice Walsh’s books. CP Daly Goodreads, October 2021

Review: What a great murder mystery with a unique setting on a remote island that adds to the drama. I’ve lived the island life, although in warmer climes than off the coast of Newfoundland, but know the feeling of everyone knowing one another. The author creates a cast of believable and relatable characters and skillfully weaves in several sub-plots, including the sorrowful family history of the main character, Blanche. I did not guess who the killer was before the end, which I like when I read a mystery. I would have liked a few more ‘foreshadowing’ clues to have made me slap my forehead at the end with a, “I should have seen that!” There were plenty of red herrings and lots of possible suspects so, all in all, a fun read! Not once did I feel bad for the murder victim and had a pretty good guess at the motive. No spoilers here, so you’ll have to read it! Anne Louise O’Connell Goodreads December 2021